Communication technology is the fastest developing area. And, of course, as we’ve moved from Web 1.0 to Web 2.0, we’re already leaping to Web 3. Research into data communications for computer networks began in the 1960s.

In 1974, Vint Cerf, Yogen Dalal, and Carl Sunshine defined the basic concepts of the Internet, Transmission Control Protocol (TCP), and Internet Protocol (IP). In 1993, the Internet made up 1% of the global communications landscape. By 2000, it had grown to 51%, and more than 97% of all telecommuted information in 2007. Today the Internet is the center of modern civilization. Take business and regular communication to a higher level. And this isn’t even its final form. 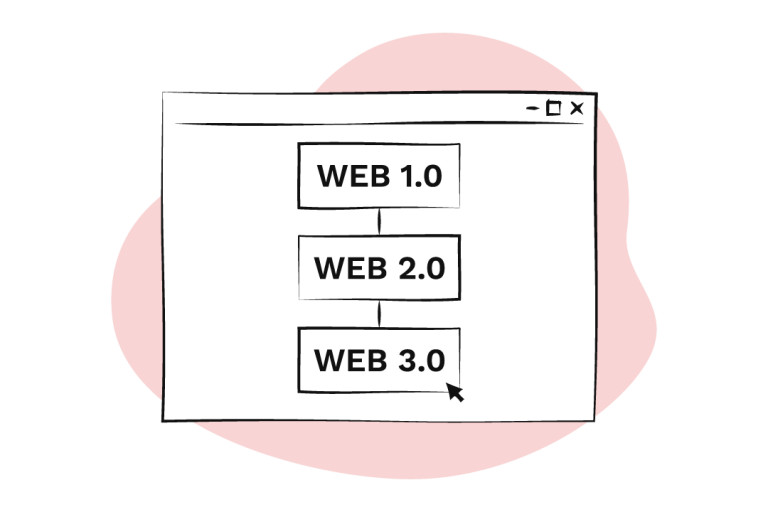 In the 1990s, Internet 1.0 entered the field of communication as the “read-only web“. I could only browse websites and read them. Websites were built using static HTML pages that could only display information. First, you would need to check the website directories.

Only after 2000 did some search engines become usable with essential functions. Believe it or not, the “era” of Web 1.0 was when Yahoo was the MVP, and Google only dreamed of becoming the next Yahoo.

A more interactive form of the Internet began to take shape in the late 1990s. CSS didn’t exist in the early 2000s, so developers had to write thousands of lines of PHP, HTML, MySQL, and JS to customize a website a little more. However, when the first version of Flash was released in 1996, it revolutionized website design. It allowed developers to create various websites with complex media such as web applications, games, videos, and images. Flash offered some features that were lacking for a while. But as devices have evolved, so has the notion of acceptable loading times.

Flash then began adding little to no value to modern browsers

As more designers and developers recognized the benefits of web standards, HTML5 and CSS3 websites began to replace Flash-based websites. With the appearance of Facebook in 2004, the transition from Web 1.0 to Web 2.0 became clear. Major client-generated content-based platforms like Reddit (2005), Twitter (2006), and Youtube (2007) that followed reinforced the “read-write web” forever.

The Web wasn’t just for companies to appear on a website. The ordinary internet user got one vote. Hence, reviews and testimonials became essential for marketing purposes. Additionally, since the advent of smartphones in 2007, more and more people have a fully functional, internet-connected device in their pocket. So now, on Web 2.0, weblog, share videos, write reviews, and do voice searches. In addition, from a small mobile device, we use the Internet in its maximum capacity as a social tool, an encyclopedia, for buying and selling, or as a weapon against brands.

As the Internet evolved, scientists began to study what might become of the Web. The first concept related to Web 3.0 came from Berners-Lee in 1999 as the “semantic web“. “I dream of the Web [on the computer] being able to analyze all the data on the Web: the content, the links, and the transactions between humans and computers. The mechanisms of commerce, bureaucracy, and our lives are actually. The day is done by machines talking to machines.

The “intelligent agents” heralded for years will finally materialize. But in time, Web 3.0 will go beyond the “semantic web” to include artificial intelligence, interoperability, decentralization, and other issues.

As free web platforms began to take over a large portion of programmatic advertising across the Web, users began to fear for their personal information. And as blockchain and cryptocurrencies emerged, the desire for decentralization grew. Hence, the blockchain community envisions a Web 3.0 with the above 5 features and, more importantly, a decentralized peer-to-peer network. The “decentralized web” harnesses the power of blockchain technology to resolve the need for centralized operators, just with immutable encrypted data. Currently, the Ethereum platform is the closest blockchain platform to Web 3.0.

Large technology companies are already using software that can analyze complex data and link various parameters. We can even access Google Maps to see cities from the other side of the planet. And we still feel like advertisers are eavesdropping on our conversations through our devices. However, since most people are used to a highly social and interactive web, the question has been raised for years as to whether we have fully migrated to Web 3.0.

However, there is no reason to believe that we have left the Web 2.0 zone. So the short answer is “not yet“. Research on artificial intelligence has yet to produce a product that can be used efficiently on the Internet.

Many apps these days are limited to running on a single operating system (iOS, Android, Windows, or others). And while virtual reality continues to evolve, it still has a long way to go before it becomes widespread. However, we are close to Web 3.0.

The “decentralized web” leverages the power of blockchain technology to eliminate the need for centralized operators operating only on immutable encrypted data.