WHAT IF… WE’RE RIGHT ABOUT BITCOIN? 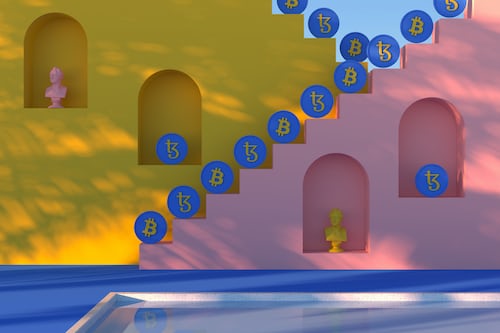 Entering 2022 with the clown world simulation shifting into ever-higher gears, it’s worth remembering why we’re here and why Bitcoin is worth fighting for. So what if we’re wrong? The real question is: What if we’re right?

THE HUMANITY-ALTERING POTENTIAL OF BITCOIN

As we enter 2022, we should all stop and marvel at how far Bitcoin has come over the past 13 years. What started as a white paper has grown through infancy and into a healthy, robust, adolescent global phenomenon.

Against the backdrop of clown world simulation shifting into ever-higher gears, Bitcoin has become a heartbeat and source of truth and sanity for millions around the world. The sheer importance of an individually-enforced, voluntarily-sought, collective and objective truth cannot be overestimated.

But, despite the very real, practical and undeniable progress that has been made, there are many who will continue on with their salt-laden disbelief and yell at clouds with uninformed variants of the same, tired anti-Bitcoin arguments.

I can only watch on as the naysayers, FUDsters, fraudsters and fiaters do their best to confuse others and themselves on their way to economic irrelevance. And while I am now immune to their stupidity, I cannot help but feel sorry for them, or perhaps pity their lack of hope and faith.

It reminds me a little of the scene in “The Matrix Reloaded” where the team is preparing to enter the matrix so that Neo can go meet the Architect. Morpheus, in appropriate form, is conducting a sermon, reminding everyone that where some might see coincidence, he sees providence.

“I do not see coincidence, I see providence. I see purpose. I believe it is our fate to be here. It is our destiny,” he says.

“I keep thinking, what if you’re wrong? What if all this, the prophecy, everything is bullshit?”

“Then by tomorrow, we’ll all be dead.”

Then more importantly, he follows up with:

This scene reminds me of the hope that Bitcoin represents against both, a) the tired pessimism that most intelligent but well-meaning people display, and(b) the empty nihilism of the rest of humanity.

Bitcoin is a noble, moonshot attempt at building a parallel world on a sound foundation, because the alternative, the status quo, is a complete mess.

By no means does Bitcoin just blindly “fix” everything, but by tying human action to some form of real economic consequence, it for damn sure aligns individual behavior to a more‘“natural” order.

In this way, we have a much better shot at moving the world not just closer to “heaven” but at the very least, off the pathway to hell, which we are currently both on and accelerating through.

If Bitcoin does not succeed, then much like Morpheus’ sentiment above, we’re largely fucked. Society will regress until all of the capital we’ve built in the preceding millennia has been depleted and society collapses, or we reside in sterile, technocratic dystopias, until the centrally-planned system cracks, tears and collapses atop everyone — at which point primitive humans like Equality 7–2521 in Ayn Rand’s novella “Anthem” must re-emerge once more to rebuild.

Either way, in the absence or failure of Bitcoin, the world is a bleak, dark, cold, empty and sterile place where the worst form of parasitic behavior is incentivized and the very spirit of progress, diversity and life is extinguished under the guise of “equality.”

Now… think of the alternative.

WHAT IF BITCOIN DOES SUCCEED?

What if we are right and the organic emergence of a sound money helps to transform individual behavior toward morality, lower time-preferences and further sightedness? What if this monetary standard introduces shorter, faster and higher fidelity feedback loops for the actions taken by individuals, corporations, cities and nations?

What if these enhanced feedback loops turn into faster corrections of poor decisions, alongside the doubling down of actions that result in true progress? What if this turns into more accurate value judgements in the aggregate such that society becomes more prosperous, moral and forthright?

What if this new money, fixed in supply and fixed in its rules, makes inflation a thing of the past, and brings about an age where the costs of products, goods and services decrease in lockstep with the increased efficiency and efficacy we can produce and deliver them with?

What if this then translates into a meritocratic society in which both social and economic mobility are possible, where productivity and value creation is what enables one to climb, while wastage, poor judgement and parasitism lead to downward motion?

What if this is how we can transform society into an organic, dynamic 80/20 distribution instead of a cancerous, static 99.9/0.01 distribution where the poor can never climb, the parasitic elite can never fall and the productive middle has to carry the entire load?

What if the absence of mindlessly borrowing from the future, of forced taxation and involuntary theft via inflation makes those who govern accountable for their actions? What if it transforms the relationship between the government and the governed to one where the former is a customer-service provider, instead of the current subject/overlord status quo?

What if Bitcoin, through its effect on human behavior, kick starts the next phase of natural evolution in the human genus? What if over generations of more far-sighted, low-time preferring and productivity-oriented behavior, we begin to bake morality into our DNA and evolve into a more majestic, noble species of human? Homo bitcoinicus, perhaps?

What if Bitcoin is the most important discovery since fire because it allows us to encode the product of our labor into high-fidelity information and either store it forever or transmit it at the speed of light? What if this ability ushers in a new renaissance of collaboration, cooperation and productivity?

What if Bitcoin is our path through the great filter?

I truly believe so, in my heart of hearts.

How many of these “what ifs?” are possible? What will the near- and longer-term futures look like?

Of course, I do not know. None of us do. We can use first principles, intuition, instinct and experience to make estimations, but in order to discover it, we must create and build it.

This is why free, independent, entrepreneurial, productivity- and creation-oriented people will thrive on a standard in which this kind of behavior is incentivized. In other words: on a Bitcoin standard.

And getting there will require a large dose of faith and hope, because the clarity needed to make accurate value judgements and calculate economic costs is still emerging (Bitcoin).

A creator is he who brings forth that which does not yet exist. This is why today’s message is one of hope. We must forge ahead and bring about a world we can be proud to not only live in, but to pass onto our kin. We must hope, and hope in the highest sense of the word. In its shadow form, it can be seen as a weakness. Something which is flaccid, impotent and merely waiting for another to come save or protect you.

The “Hope” I speak of is capitalized. In its light, it is one of our greatest strengths.

“Hope, it is the quintessential human delusion, simultaneously the source of your greatest strength, and your greatest weakness.”

–The Architect, “The Matrix Reloaded”

Bitcoin is Hope and I want to take a moment to thank Michael Saylor for pointing that domain to the right source.

Please don’t waste my time or anybody else’s with, “What if Bitcoin doesn’t work?” Neither pessimism nor nihilism help.

Spend your time actually bringing forth a new Bitcoin standard, because even if it delivers on a fraction of what I’ve stated above, it is a monumental step change to the current alternative; a globalist faux dystopia blending slavery, lies, bugs, pods, bondage, serfdom and sterility.

As Eminem said, we have one shot, one opportunity to seize everything we ever wanted. Are we going to capture it, or just let it slip?

Love, truth and Bitcoin shall prevail! For they must prevail.

This article was originally published on Bitcoinmagazine by ALEKSANDAR SVETSKI