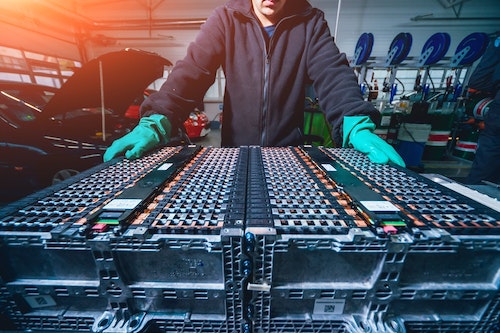 Nowadays, batteries for electric vehicles are expected to have a high energy density, allow fast charging and maintain long cycle life, while providing affordable traction, and complying with stringent safety and environmental standards. Extensive research on novel materials at cell level is hence needed for the continuous improvement of the batteries coupled towards achieving these requirements. This article firstly delves into future developments in electric vehicles from a technology perspective, and the perspective of changing end-user demands. After these end user needs are defined, their translation into future battery requirements is described. A detailed review of expected material developments follows, to address these dynamic and changing needs. Developments on anodes, cathodes, electrolyte and cell level will be discussed. Finally, a special section will discuss the safety aspects with these increasing end-user demands and how to overcome these issues.

Nowadays, batteries have become an essential part of everyday life. With productsand devices becoming increasingly electrified, battery usage has grown heavily over thepast decade. Currently, they are mainly used in portable electronics, mobility applicationsand stationary storage. Mobility applications, comprising different categories of electricvehicles (EVs), represent the biggest share of the global battery market and are expected tocontinue growing, following the expected increase in electromobility [1]. EVs are projectedto demand 90–95% of the total production of Li-ion batteries (LIBs) by 2030 with mostpredictions indicating around 150 million EVs on the roads by that time. Because of thedominating share on the battery market, the demands of the electrification of vehicles andtheir end-user expectations have been the primary drivers for the development of advancedbattery technologies over the past decade.

Nickel (Ni) has long been widely used in batteries, most commonly in nickel cadmium (NiCd) and in the longer-lasting nickel metal hydride (NiMH) rechargeable batteries, which came to the fore in the 1980s. Their adoption in power tools and early digital cameras revealed the potential for portable devices, changing expectations of how we work and live. The mid-1990s saw the first significant use of NiMH batteries in vehicles in the Toyota Prius. Around the same time, the first commercial applications for Li-ion batteries emerged, initially in camcorders and eventually finding their way into smartphones, laptops and the numerous other portable devices we now take for granted.

The major advantage of using nickel in batteries is that it helps deliver higher energy density and greater storage capacity at a lower cost. Further advances in nickel-containing battery technology mean it is set for an increasing role in energy storage systems, helping make the cost of each kWh of battery storage more competitive. It is making energy production from intermittent renewable energy sources such as wind and solar replace fossil fuels more viable.

The importance of nickel in rechargeable battery technologies

An electric battery consists of one or more electrochemical cells, which comprise two electrodes – an anode and a cathode – and an electrolyte. When the two electrodes are linked by a pathway that conducts electricity, electrons can flow from one to the other. When a battery is used to supply electric power, the anode provides electrons, which will – when connected by a circuit to an external device – flow and deliver energy.

There are two classifications of batteries. Primary batteries are disposable, for single use; secondary batteries can be recharged and reused. Secondary batteries come in a number of varieties, such as the lead-acid battery found in automobiles, NiCd (Nickel Cadmium), NiMH (Nickel Metal Hydride) and Li-ion (Lithium ion).