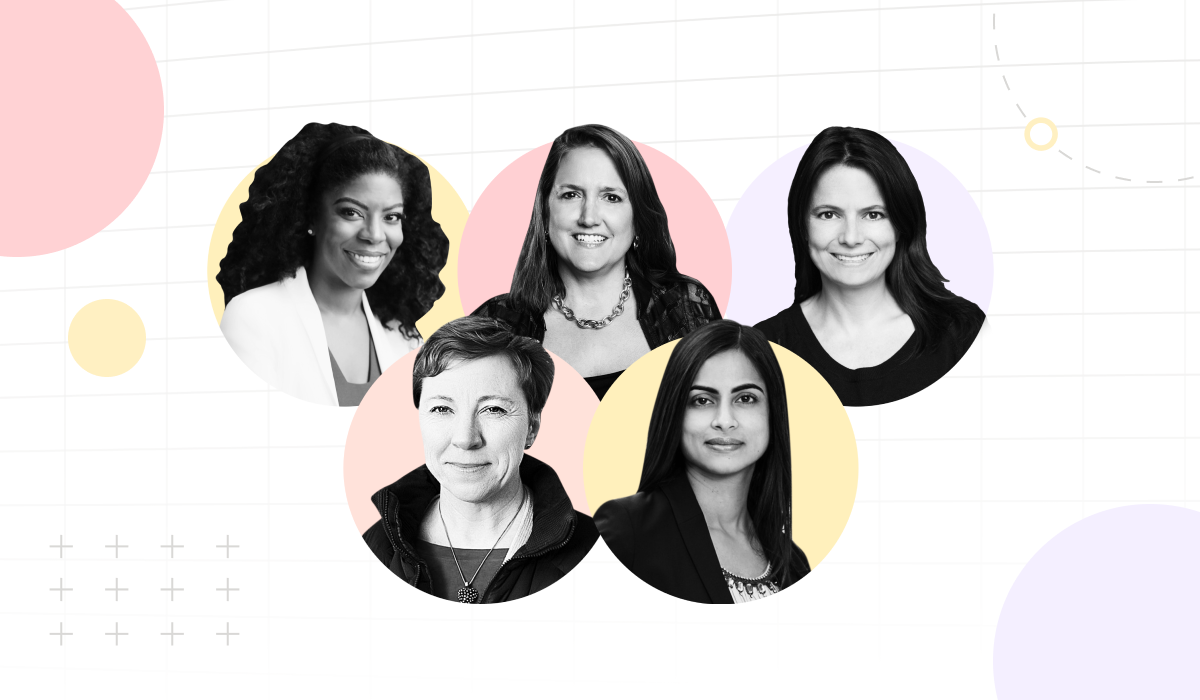 In 2021, one hundred years after women won the right to vote, America voted in Kamala Harris, the first woman vice president and highest-ranking elected woman official in U.S. history. There have been many notable women in science who have made a significant difference during the pandemic. From landing NASA’s Perseverance rover on Mars to breaking records in landing CEO roles in America’s largest corporations, we have come a long way in advancing women’s rights and gender equality in many industries.

The same can be said for the finance world too. A Bloomberg article revealed that in 2020, U.S. companies hired a record number of CFOs. As of August 2020, 90 women held the CFO role at S&P 500 and Fortune 500 companies.

In honor of Women’s History Month and using this year’s IWD theme of #ChoosetoChallenge as inspiration, we’d like to highlight five inspirational women who have made significant impacts as financial leaders. These women are climbing the corporate ladder, breaking the glass ceiling, building diverse teams, creating new business models and showing us that stats and industries can and do change in time.

Amy Hood joined Microsoft in 2002 and in her role as Executive Vice President and Chief Financial Officer she has been leading the company’s worldwide finance organization. This includes involvement in the company’s overall operations and strategy development.  For the past seven years, she has worked alongside Microsoft’s CEO Satya Nadella as a strategic partner, driving long-term financial growth, championing culture and leading corporate initiatives such as Microsoft’s commitments to climate change and affordable housing.

2. Kendra James-Anderson, Virtual CFO and Owner of The Finance Femme

Kendra James-Anderson’s experience working in diverse industries as a financial planning analysis manager led her to create The Finance Femme because she recognized that there was a large gap in the financial management industry. Billion-dollar companies had CFOs working as strategic partners to CEOs assisting with everyday decision making based on facts, data and analysis, but the same wasn’t so for smaller businesses. They were often left working with CPA and accounting firms whose business approach was more reactive rather than forward-looking. So she created the Virtual CFO service to serve businesswomen as a financial partner, providing high-value services that give business owners the forward-looking support they need. Besides supporting the finance needs of businesswomen daily with Virtual CFO, Kendra also coaches and mentors women in the accounting, finance and tax industries, helping them build their businesses and brands.

Dhivya Suryadevara is the Chief Financial Officer at Stripe, a global technology company that builds economic infrastructure for the internet helping millions of companies of all sizes manage their businesses online. Prior to Stripe, she was the Chief Financial Officer of General Motors. Her appointment as GM’s CFO back in 2018 made GM one of two Fortune 500 companies that had both a female CEO (Mary Barra) and CFO (Hershey is the other company). Dhivya decided to join Stripe because she believes that the internet is still not the engine for global economic progress that it could be. Dhivya was named in the list of Forbes ‘40 Under 40’ in 2015 and 2018. She was also named one of Barron’s 100 Most Influential Women in US Finance in 2020.

As CFO of the world’s leading live entertainment, ticketing and e-commerce company since 2007, Kathy Willard has certainly built up the financial strength of the company enough to withstand the challenges brought on by the pandemic. In fact, in March of 2020, Live Nation announced that concerts would be put on hold indefnitely, setting a standard of safety and caution for the rest of the industry. Before taking on the CFO role at Live Nation, she worked for the company for nine years as its executive vice president and chief accounting officer.

Canadian businesswoman and social entrepreneur Zita Cobb worked in the high-tech industry for years as a CFO before retiring, leaving that world behind and heading back to her hometown of Fogo Island with a purpose: to do something in response to the economic and cultural challenges the small coastal community had experienced over the past decades. Along with her brothers, Zita founded the Shorefast Foundation, a registered Canadian charity whose mission is to revitalize Fogo Island as well as Newfoundland and Labrador. The Foundation puts all of its profits back into the community by operating businesses and employing people in the Fogo area. One example is the Fogo Island Inn, a community-owned business that opened in 2013.

To find out how to build a culture of diversity, equity and inclusion in your workplace, read this blog.

Choose To Challenge Every Day
In the workplace, choosing to challenge every day involves: