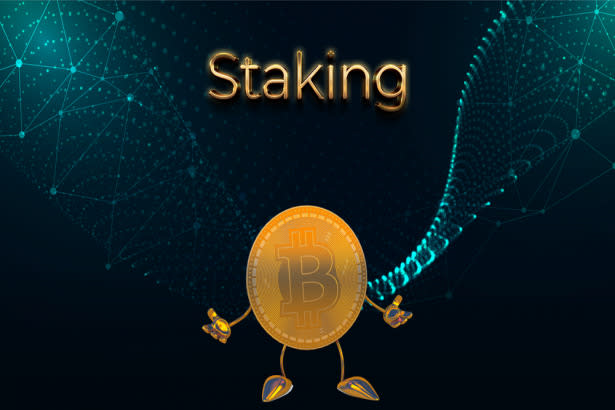 Let’s start with the basics: what is crypto staking? Staking is part of the process that certain cryptocurrencies use to verify transactions. It’s all part and parcel of a consensus mechanism called “proof of stake.” This sees blocks of transactions added to a blockchain, an indelible string of “blocks” of transactions, by people who already hold a certain stake in that blockchain’s native currency. The process is similar to the mining, used to add blocks to the blockchain of proof-of-work blockchains such as Bitcoin. The difference is, in the case of proof-of-stake blockchains (such as Cardano), the process is called forging (or sometimes “minting”), and the people who do it are called validators or forgers rather than miners.

What is proof of stake?

So what is this proof-of-stake thing that everyone’s been talking about? Well, proof of stake is a consensus mechanism for processing transactions and creating new blocks in a blockchain. In the proof-of-stake system, validators process transactions and create new blocks of a blockchain just like miners do in a proof-of-work blockchain (such as Bitcoin). The difference is that to gain the right to create a block, instead of racing to be the first to complete complex mathematical problems like miners do, in the proof-of stake system, nodes (computers that participate in building the blockchain) do so by setting aside (or “staking”) a certain amount of their holdings. A validator is then semi-randomly chosen for each block from all those who have staked a minimum amount of coins. After that, this validator creates (forges) the block and other validators validate it. The validator gets a reward for creating the new block in the form of the native coin of the blockchain (e.g. ADA on the Cardano blockchain), but if the block turns out to include a fraudulent transaction, they lose some or all of their stake! (And so does any validator who validated it.)

To choose who the next validator to verify the block will be, the proof-of-stake algorithm uses factors including how long the validator has held the stake, how big the stake is and a sprinkling of randomization. This takes far less computing power and electricity than it takes for the proof-of-work system’s miners to win the right to create a block by being the first to solve a complex math problem. For this reason, proof of stake is both a greener and a more efficient process than proof of work, and often leads to transactions being validated more speedily.

Which cryptocurrencies use proof-of-stake consensus?

Not every currency uses proof-of-stake mechanisms—Bitcoin, for example, operates on a proof-of-work model. There are lots that do, though, including:

In addition, Ether’s blockchain Ethereum is in the process of switching over to a proof-of-stake mechanism, and plans are afoot to complete the switch by the end of 2022.

How does staking cryptocurrency work?

There are many ways you can get involved with staking coins that are much easier than setting up as a validator yourself. These include staking on a cryptocurrency exchange or joining a staking pool.

Staking on a cryptocurrency exchange

Staking via a cryptocurrency exchange means that you make your crypto available via an exchange for use in the proof-of-stake process. In essence, it enables holders to monetize their crypto holdings that would otherwise lie idle in their crypto wallet. In this approach, the exchange does much of the administrative work for you, seeking out a node for you to join so you don’t have to do it yourself. It’s not completely risk-free, though—you do have to run the risk of entrusting your coins to the exchange and node in question.

A staking pool enables stakers to earn block rewards by sharing their resources, similarly to a mining pool. These pools tend to follow a two-tier system, with an administrator overseeing the work of the validators and ensuring things run smoothly. When rewards are earned, they’re split between the pool operator and pool delegators , but some pools do additionally charge entry and membership fees.

What are the advantages of staking crypto?

There are all kinds of reasons to stake crypto, including:

What are the risks of staking crypto?

Staking isn’t a risk-free exercise, however. You could run into some of the following risks of staking crypto: