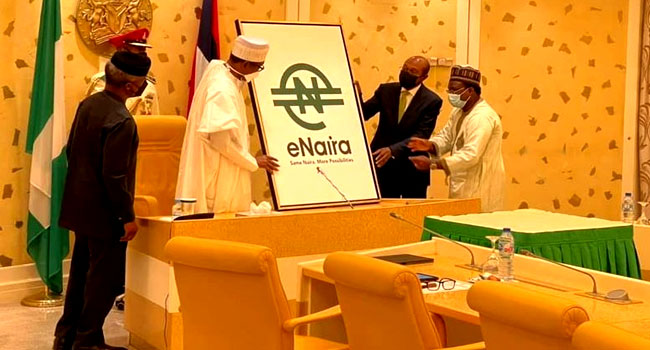 LAGOS, Nigeria (AP) — Nigeria has launched a digital currency which the Central Bank of Nigeria says is a “major step forward in the evolution of money” in Africa’s most populous country.

President Muhammadu Buhari said at the launch Monday that the digital currency and the blockchain technology it uses can foster economic growth and increase the GDP of Nigeria’s economy, one of Africa’s biggest, by $29 billion over the next 10 years.

The use of the Nigerian Central Bank Digital Currency “can help move many more people and businesses from the informal into the formal sector, thereby increasing the tax base of the country,” Buhari said, eight months after the West African nation began a crackdown on cryptocurrencies.

The eNaira — whose motto is “Same naira, more possibilities” — is an equivalent of Nigeria’s paper naira currency and is regulated as an official tender by Nigeria’s Central Bank. Experts see the launch as a big step toward a cashless Nigerian society and speedy growth of the digital economy which has been a priority of Nigeria’s apex bank since 2012.

“The eNaira is a major advancement for Nigeria,” said Andrew Nevin, chief economist at PricewaterhouseCoopers Nigeria. “It is a much simpler payment mechanism and … is going to help in a lot of dimensions including in reducing the amount of cash being used and the cost of transactions.”

The central bank said the launch of the digital currency is “one milestone on a long journey … eNaira enables households and businesses to make fast, efficient, and reliable payments, while benefiting from a resilient, innovative, inclusive, and competitive payment system,” the bank said in a policy document seen by The Associated Press.

The central bank also hopes the digital currency will encourage financial inclusion in the country of more than 200 million people. Only 45% of Nigeria’s 106 million adults have bank accounts as of 2020, according to the Lagos-based Enhancing Financial Innovation & Access, a financial sector development organization.

Authorities are optimistic the eNaira will also drive digital transactions which have seen rapid growth in Nigeria over the years. As of 2020, the country’s recorded 2.7 billion transactions valued at 162.9 trillion naira ($396 billion), according to the central bank.

The initiative will also make it “much easier to transfer value” especially for small-value transactions, Nevin told AP. “Fintechs, banks and other financial players building on top of the eNaira will create more and more useful products and services and the positive economic impact is going to build up,” he said.

The digital currency is expected to boost cross-border trade and financial inclusion, make transactions more efficient as well as improve monetary policy, according to the central bank.

“Alongside digital innovations, CBDCs can foster economic growth through better economic activities, increase remittances, improve financial inclusion and make monetary policy more effective,” Buhari said. Digital money can also “help move many more people and businesses from the informal into the formal sector, thereby increasing the tax base of the country,” he said.

The Central Bank of Nigeria in August selected Bitt Inc. as a technical partner to help create the currency that was initially due to be introduced on Oct.

Nigeria joins the Bahamas and the Eastern Caribbean Central Bank in being among the first jurisdictions in the world to roll out national digital currencies. China launched a pilot version of its “digital renminbi” earlier this year. In Africa, nations from Ghana to South Africa are testing digital forms of their legal tender to allow for faster and cheaper money transactions, without losing control over their monetary systems.