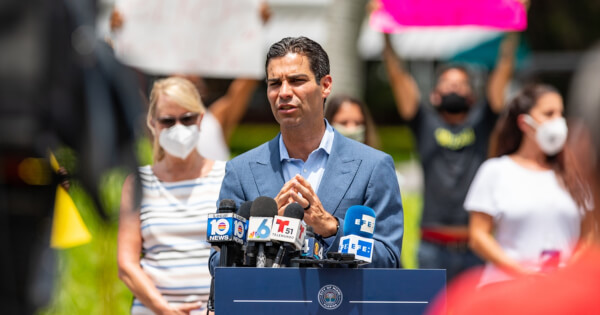 Francis Suarez, an American attorney and politician serving as the 43rd Mayor of Miami, announced on Twitter on Tuesday that his next salary will be received in Bitcoin (BTC).

In his posting, Francis Suarez stated that he will become the first American lawmaker to accept bitcoin as a salary payment.

According to the Miami Herald, the mayor of Miami’s annual salary is $187,500.

According to Coinmarketcap, bitcoin has risen by 3.53% in the past 24 hours. At the time of writing, bitcoin was trading at $63,061.43. In accordance with the current bitcoin price, Francis Suarez’s total salary is valued at about 3 BTC.

Francis Suarez seems more hopeful that his salary will be converted into Bitcoin through the use of Fintech Strike or Bitwage.

His innovation deputy Mike Sarasti responded to a Strike registration link on his Twitter. Mike Sarasti stated that in his experience, receiving a portion of my pay last week went flawlessly.

As early as February 2 this year, Mayor of Miami Francis Suarez stated that Bitcoin will be the “biggest story for the next few years,” Mayor Suarez himself, also owns both BTC and Ether (ETH) in his personal name.

Miami actively implements digital asset payments in the real estate industry. As reported by Blockchain.News on May 07, 2021, Arte by Antonio Citterio, a high-end luxury condominium located in Miami, announced to accept cryptocurrency as a payment method for luxury residences and developments.

In June, the famous French DJ David Guetta also revealed that he would accept $14 million Bitcoin or Ethereumthe payment for selling his Miami beachfront apartment.