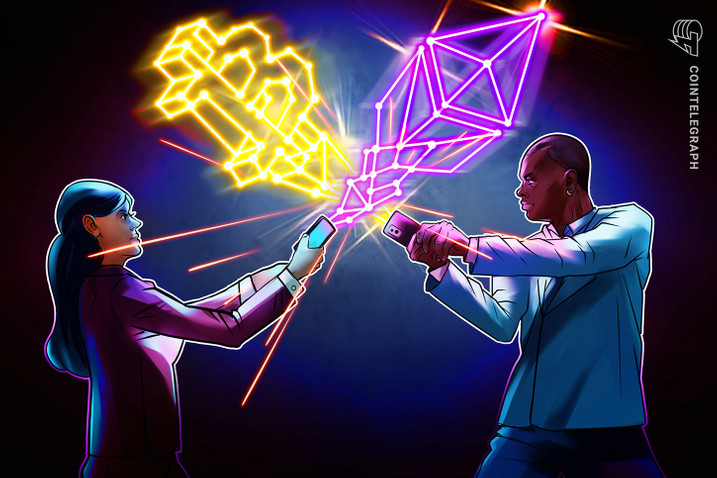 ETH/BTC dropped below its 200-day exponential moving average for the first time since March 2020, raising risks of more downside.

Ethereum’s native token, Ether (ETH), rallied by more than 15% in the first 12 days of October. But, compared to Bitcoin’s (BTC) 30% gains in the same period, the second-largest cryptocurrency is currently in a downtrend when priced in BTC.

The drop also pushed ETH/BTC below one of its longest-standing support zones, the 200-day exponential moving average (200-day EMA; the orange wave), as shown in the chart above. This raises the risk of more downside with 0.055304 BTC serving as the next possible target.

In detail, the Bitcoin Dominance Index, which measures the flagship cryptocurrency’s capitalization against the rest of the crypto market, surged from 42.39% on Oct. 1 to 46.64% on Oct. 12. On the other hand, Ether’s dominance dropped from 18.15% to 17.57% in the same period.

That shows that more capital rotated into the Bitcoin market than altcoins so far into October.

SEC Chair Gary Gensler hinted at an optimistic outcome for Bitcoin ETFs despite the SEC rejecting similar applications for eight years in a row. Gensler noted that this time, however, the Bitcoin ETF applicants filed under the Investment Company Act of 1940, which offers higher investor protection.

The SEC also approved a third crypto equity ETF. Dubbed the Volt Crypto Industry Revolution and Tech ETF (BTCR), the fund will gain exposure “in entities that hold a majority of their net assets in bitcoin or derive a majority of their earnings from bitcoin mining, lending or transacting.”

So, it appears the speculation over Bitcoin ETF approvals raised traders’ appetite for the top cryptocurrency in recent days, with BTC outperforming its top rivals, including Ether.

David Gokhshtein, founder of Gokhshtein Media and PAC Global, noted that Ethereum’s healthy network effect could send Ether to $10,000 by the end of this year. Meanwhile, as Cointelegraph covered, an ongoing supply crunch in the Ether market should remain a major talking point for bulls moving forward.