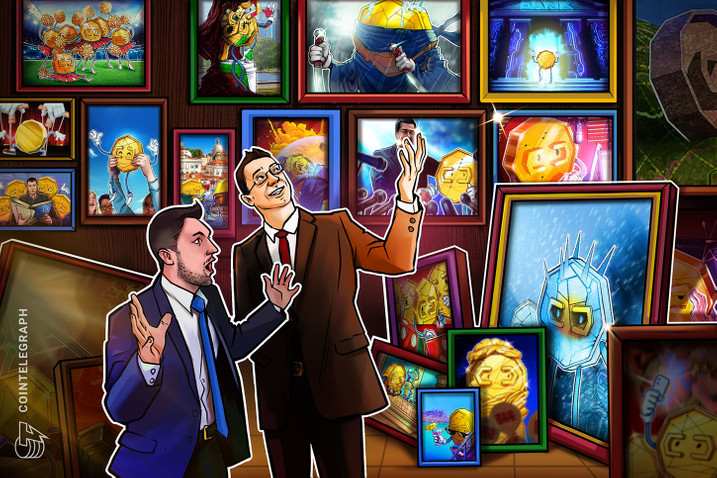 The museum with world’s largest collection of Gustav Klimt paintings celebrates Valentine’s Day with its own “digital declaration of love.”

The Belvedere museum in Vienna collaborated with the artèQ investment fund to launch a nonfungible token (NFT) drop inspired by one of Austrian painter Gustav Klimt’s most famous works “The Kiss.”

Released on Valentine’s Day, a digital copy of this early 20th century depiction of a pair of lovers was divided into a 100-by-100 grid of 10,000 individual pieces offered as NFTs.

The cost of one NFT was estimated at 1,850 euros, as stated on the collection’s website, which converted to .65 ETH on Feb. 14 and suggested the total nominal value of the NFT painting was 18.5 million euros or $21 million. However the time of publication, only 33.3 ETH, or $103,900 had been received and more than 80% of the collection remained unsold.

The relatively low take up of the Belvedere’s “A digital declaration of love” NFT collection could suggest that each piece was priced too high or that NFT purchasers are less interested in traditional art at this point in the evolution of the market.

The issued NFT certificates revealed the digital part of the painting purchased, and if gifted to a loved one, an individual dedication was included.

Ahead of the drop, Wolfgang Bergmann, managing director of the Belvedere, said in a statement:

“The very small number of shares for the world market and the fact that each piece is unique is what makes these tokens so valuable.”

Nanne Dekking, CEO and Founder of Artory Inc., the blockchain-secured registry of artworks and collectibles, spoke to Cointelegraph and echoed the sentiment. She said that initiatives like this “allow us to rethink art patronage entirely,” which she added, “empowers museums to engage with the interests of their larger community, rather than being restricted to a small number of donors.”

Related: NFTs could mark a resurgence in art galleries

Indeed, physical artwork tokenization is just one way that museums can interact with their existing community and tap into new ones. The State Hermitage Museum in Russia recently went beyond digital reproductions and launched an entirely digital exhibition within a metaverse style reconstruction of the museum.

Dekking added that tokenization of art “ultimately enables the art market to reach a wider community of art lovers,” while also potentially providing royalty payments to the museum.