Americans are buying Teslas, not EVs, but experts say that’s about to change 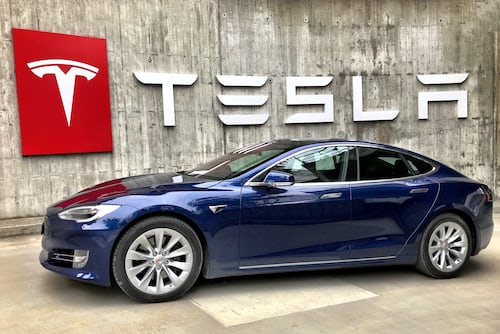 That’s been a relatively true statement for U.S. consumers in recent years, with Tesla accounting for the majority of EVs sold, including 79% in 2020, according to IHS Markit. But that’s starting to change as so-called traditional automakers and start-ups invest billions in a slew of new electric vehicles to compete against Tesla.

The influx of EVs — from a couple dozen today to estimates of hundreds of new models by 2025 — are expected to eat away at Tesla’s market share in the coming years. The new EVs are planned as larger automakers, such as General Motors and Volkswagen, transition to build electric vehicles almost exclusively over the next decade or so.

Tesla ‘at the top of the mountain’ in EV market, analyst says

“It’s no surprise that Tesla’s still dominating electric vehicle sales because they’re the only ones that really have viable products in full swing,” IHS Markit associate director Michael Fiske said. “In a growth market, it’s extremely challenging to maintain majority market share, regardless of industry. … As we start to move toward a larger and really significant number of manufacturers that are going to be playing in the space, Tesla has to lose share.”

Tesla’s market share of all-electric vehicles this year is already expected to drop to 56% in 2021, as new vehicles such as the Ford Mustang Mach-E and Volkswagen ID.4 have been introduced, IHS Markit said.

The research and forecasting company expects Tesla’s U.S. market share of all-electric vehicles to be 20% in 2025, which also is when LMC Automotive expects General Motors to surpass Tesla as the country’s largest EV seller.

Tesla’s current dominance is over a relatively insignificant market. Despite the amount of attention and hype surrounding EVs, sales of all-electric and plug-in hybrid electric vehicles — which include electric motors as well as an internal combustion engine — remain miniscule. Sales of electric vehicles, including plug-in hybrids, are projected to be less than 4% of U.S. sales this year, according to industry forecasters. Of those, all-electric models — such as Teslas — are only at 2.6% of the market, or about 394,000 vehicles, according to LMC.

“As you progress forward, it doesn’t take long to get some pretty big volume and share growth,” LMC president of the Americas Jeff Schuster said. “For the auto industry, this is a massive pivot and growth.”

While analysts and forecasters differ on how many EVs will be sold this decade, they agree the adoption will be rapid, but likely won’t meet an President Joe Biden’s executive order for half of new vehicles sold in the country to be electric vehicles.

“It’s highly optimistic to reach 50% by then,” J.D. Power managing director of automotive analytics and advisory Tony Salerno said, citing challenges such as consumer education, charging infrastructure and support from the U.S. electrical grid. “I think it will eventually get there from a utility standpoint, but It’s still early though and there are a lot of pieces to the puzzle that we need to figure out to get there.”

When Biden announced the order earlier this year, which has been characterized more as a “friendly goal,” automakers weren’t completely on board. Many, including the Detroit automakers, said they aim “to achieve sales of 40-50 percent of annual U.S. volumes of electric vehicles” by 2030.

This article was published on CNBC by Michael Wayland@MIKEWAYLAND