After the invasion of Ukraine, the Russian central bank intervenes to defend the ruble’s dropping value. 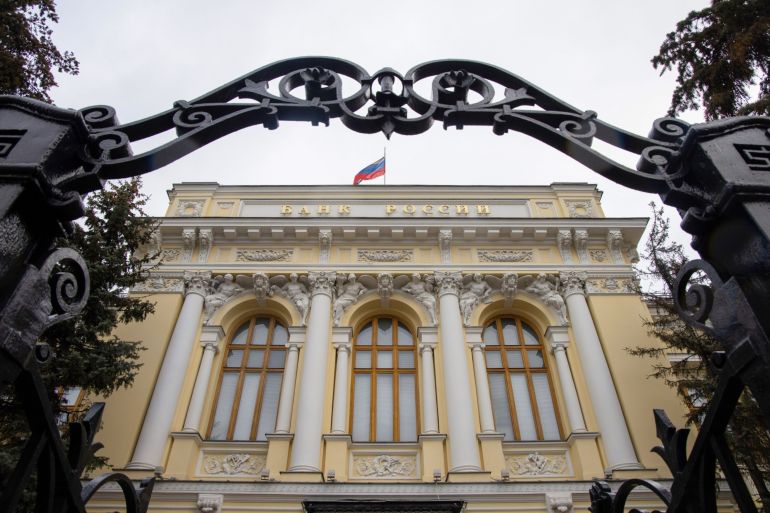 Russians formed large queues to withdraw cash from their bank accounts on Monday as the ruble plummeted in response to sanctions imposed on Russia by the U.S., U.K., Canada, and European Union over the weekend.

The currency dropped almost 30% in value on Monday.

Adding to the pressure on Russian banks, many shops stopped accepting some card payments in anticipation that the U.S. decision to cut a number of Russian banks off from the SWIFT payments network might result in the inability for these card transactions to be processed.

The Bank of Russia, the country’s central bank, more than doubled interest rates to 20% in an attempt to shore up the crumbling ruble. The country also barred foreign investors from selling Russian stocks and bonds in an effort to force them to continue to hold rubles.

But the Bank of Russia’s ability to defend its currency may have been severely undermined by the decision of the U.S. and other Western allies over the weekend to restrict the Russian central bank from “deploying its international reserves” in a way that could mitigate the effect of sanctions.

Russia had about $643 billion in international reserves as of mid-February, according to the Bank of Russia’s figures. Normally, in a currency crisis, the central bank could sell those reserves for rubles in order to prop up the value of the currency.

But $300 billion of those reserves is held in the U.S., France, Germany, the U.K., Japan, and Austria, according to the latest figures available, which date from the start of 2021. Another $30 billion was held with international monetary organizations, where the U.S. may also be able to prevent Russia from accessing them.

So the U.S. decision to limit the Russian central bank’s ability to sell foreign exchange reserves for rubles might have essentially halved its financial firepower in one swift stroke. (One big caveat is that there are still few details about how the restrictions will be implemented.)

“This is a kind of financial nuclear bomb that is falling on Russia,” said Sergei Aleksashenko, a former deputy finance minister and deputy central bank governor, in a video blog.

There are already indications that the Bank of Russia is gravely concerned about the ruble’s plunge and its weakened ability to support the currency. On Monday, it mandated that Russian energy and metals exporters sell 80% of their own foreign exchange reserves, in order to create more demand for rubles.

Russia has other ways of propping up its currency. With the sanctions specifically exempting Russia’s international oil and gas sales, the country can still earn plenty of hard currency. The country earned $55 billion from natural-gas exports alone in 2021, and with gas prices spiking, in part due to Russia’s invasion of Ukraine, it will earn even more this year.

Previous experience shows that these efforts may not be enough. In 2014, after Russia annexed Crimea and the country was initially sanctioned, the ruble also plunged. At the time, Bank of Russia spent more than 10% of its total foreign exchange reserves in an effort to bolster the currency before admitting defeat and allowing the ruble to fall freely.

At the time, however, the bank had a policy of trying to keep the ruble trading within an adjustable band against a basket of foreign currencies. This obligated the bank to intervene in currency markets to smooth the currency’s plunge. The bank has since abandoned that policy. But the bank may still feel it needs to expend its foreign exchange reserves in an effort to stave off hyperinflation.